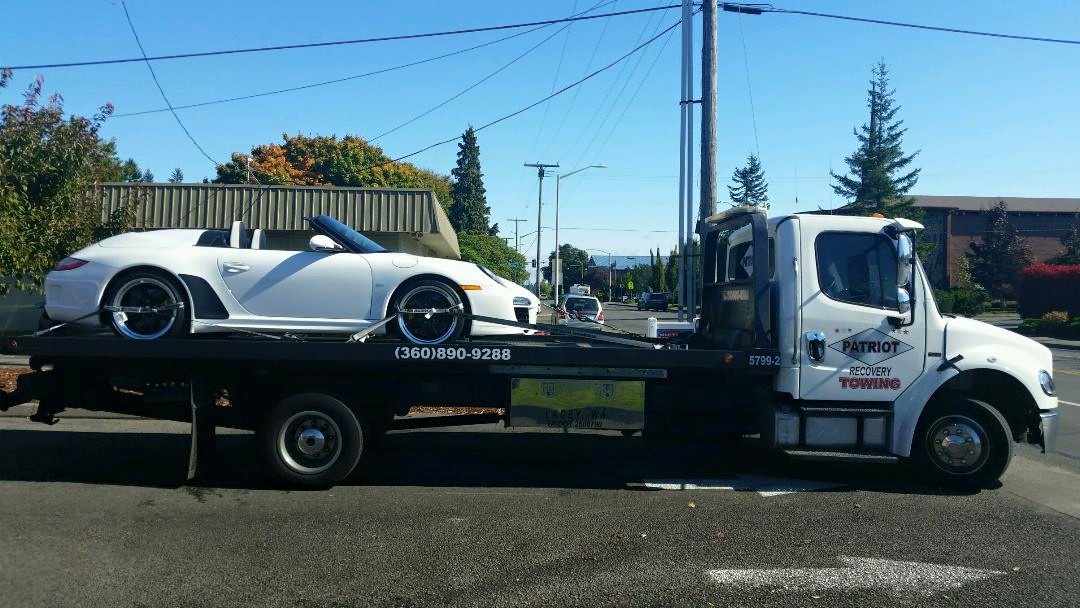 Towed my Harley with extreme care. I’m a professional mechanic and deal with many tow companies. Best experience I’ve had with a tow company. Very fast service, competent drivers, and quality equipment. I recommend Patriot Towing, and will gladly use their services again if the need arises. Thanks guys. – Robert Shannon

You guys did an amazing job towing my husband’s truck to the shop so that it could get repaired. His truck had not moved for about 3 months. Thank you for your awesome work and also recommending an amazing shop for the work. Will be keeping you in mind for future needs and recommending you as much as possible. – Hope Mead

I lost all fuel pressure on I5 exit 95 at 8pm on a Saturday night. I called AAA and they couldn’t get service out to me and told me I had to find my own tow truck and that I would have to find a cab (which would have been $100) bc no tow company can transport 3 people. I called a few and Patriot was the first, they didn’t answer at first, and neither did the second company I called… I am so tired and frustrated, had been driving all day and just wanted to get home… By the time I rang third, just 3 minutes after missing my call, the manager/ owner of Patriot called me back… When I said hello he must have heard my frustration bc he was very concerned above all else that I was safe and in a safe position… Then he not only got a truck to us in 18 MINUTES!!!!! He also made sure that they brought a truck that could transport all three of us, even though my car did not require the equipment load that this tow truck possessed, they still sent it just to make sure I didn’t have to spend another $100 on a cab. The driver was very nice… He helped us find our keys I lost (it was a long day) and they helped us get our jeep into the parking spot: both gentlemen calmed my nerves immediately, it is always so amazing to see/experience honest real genuine caring customer service!!!! Thank you Patriot!!!! And I think with your logo you could pull off Seahawks shirts, without it being confusing with the Patriot part. – Leeana Maguire

My motorcycle broke down on the interstate. These guys came out quickly when no other provider would. They had a proper motorcycle tow rig and the driver was friendly. – Glenn Schworak

A few weeks ago I was driving home and my clutch blew out. I was stuck on the side of the road in the dark and freezing cold with my daughter and my dog in the car. I had called my emergency roadside assistance which initially sent a different tow company to come and get me. Several hours had gone by and I was notified that the previous tow company bailed. My insurance called and sent out Patriot Towing. Immediately I was contacted and asked if I was safe, and that they were on their way, to come and help me. I found out that they actually drove out of area to come and get me because of the situation. The driver that came out was Bill. He was very helpful, kind, and genuinely cared. He was a godsend that day. Bill went out of his way to make sure I was warm, felt safe, and knew that things were going to be okay. I highly recommend Patriot Towing. If in the future I’m in a situation where I need a tow, there’s no other company I will call but them. Thanks for such outstanding service! – Kat Bitz

Punctual and efficient. The owner, Bill, is friendly and a straight shooter. Highly recommended. – Dave Lucas

My husband and an employee were stranded in Tacoma today (Sunday) after getting a flat tire. Bill was incredibly honest and helpful, looked up what reliable companies were closer to where they were stranded so we could save money, and helped me figure out exactly what information I’d need to tell these other companies so they would arrive with the proper set up. I was so stressed out and frazzled when I called, but when I was done talking with him I felt so much better about everything. Thanks, Bill, and if I ever need a tow closer to home, you’ll be my first choice! – Julia Felix

The owner Bill is an outstanding character! Not only worked through my terrible navigation skills, and poorly placed vehicle with a smile on his face. But he saved me 100s in the long run. I had planned to move it from one spot to the next(cause my driveway was full) until I could get it fixed. His network system brought me to Expert Auto repair LLC where they beat other quotes I got from other mechanics. I also lost my keys to this vehicle. So Bill called up Sampson Locksmith where he also knows people and got me an awesome price there too. All in all, I got a cheap, friendly, reliable tow, and a bunch of other things I needed for my vehicle all checked off thanks to this guy! 10 stars if I could! – Alec Chase

Where to find us